Today we are sharing an excerpt of an article by Apics which focuses on some of the current job market trends for operations management positions and which specific job positions appear to be most in demand.

Operations Management Employment to Improve by 31 Percent in 2017

Findings from the “2016 APICS Operations Management Employment Outlook” report forecast an increased amount of opportunities for individuals in the field. APICS and the University of North Carolina Wilmington’s Cameron School of Business interviewed a random sample of 30,000 industry professionals around the globe to create a joint report providing year-to-year comparisons; trend analysis; and a 12-month outlook on hiring, layoffs, job function, job title, and salary compensation.

The job market for operations management professionals has been steadily improving since the first salary and employment report was released in 2009. Forty-one percent of survey respondents anticipate hiring within the next 12 months, up from 38 percent of survey respondents in the 2014 project. This growth in anticipated hiring pairs with a 3 percent decline in anticipated layoffs, resulting in a significant 31 percent projected net gain for operations management industry employment in 2017. 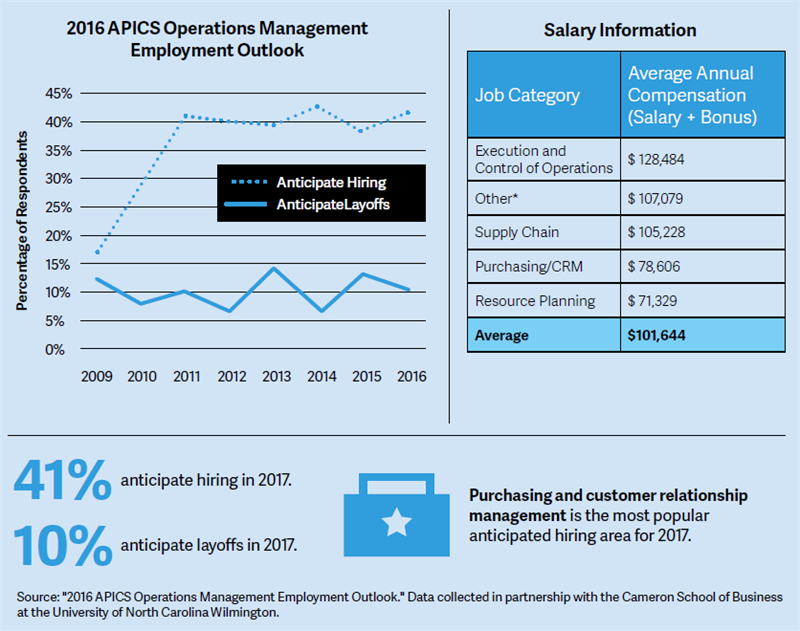 Salary and compensation data collected in the 2016 survey also continue the positive trends reported in years past. Average annual compensation across all operations management job categories was reported to be $101,644 in 2016, a 3.3 percent increase compared with the 2014 report’s findings.

Respondents who classified their roles as “execution and control of operations” average the highest reported annual compensation. Those who selected “resource planning” as their job classifications are the lowest at $71,329.

Since the first APICS salary survey in 2009, male salaries have consistently outpaced female salaries, mirroring the gender bias found across industries nationwide. In the “2016 APICS Operations Management Employment Outlook,” however, signs of improvement are visible. Females in the US Midwest on average across all age ranges report an 8 percent higher salary than their male counterparts. When the US sample is divided by age and gender, another promising trend toward gender pay equality emerges: Females under the age of 25 are earning 41 percent more than males of the same age. There is still much improvement needed, evidenced by the numbers for the North Central and South East regions. In these parts of the United States, females earn on average 39 and 35 percent, respectively, less than their male counterparts.

To read more of the original article click here.

If you have any questions, comments, or are in need of resume writing services, please contact Power Writers USA.